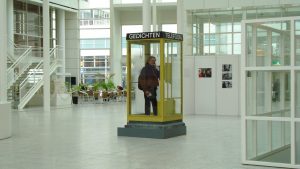 Jacqueline has been working for the foundation as a Director since 2010. She is living near The Hague since 2008. Before joining the Atrium-team, she worked for Festival Classique, Directieoverleg Podiumkunsten and the preparation team for the nomination of The Hague as a Cultural Capital in 2018. She completed her studies in Drama at the University of Amsterdam, Trinity College in Dublin and Instituto Dante Alighieri in Urbania, worked as a director of a large eventmarketing organisation in Amsterdam and Rotterdam, and as a theatre director in Shanghai, China. In recent years, she has focused more on the visual arts, such as in the many encounters with artists interested in an exhibition in the Atrium. They work together to get the best concept.

Laura has been working as an Office Manager for the foundation since september 2011. After obtaining her graduation Bachelor Art & Economics at the HKU, she has worked at an international music- and filmrights organisation, music stages in Rotterdam and an audio- en videoproduction company in The Hague. She plays tenor saxophone for more than 10 years with the Woodstreet Big Band, the oldest big band in The Hague. Laura has met a variouty of people in the last years, who want to use the Atrium to organise their activity. From an ambassador until artists, the Atrium gives a various picture of her beloved city of The Hague. She can also find this in her work as Office Manager; from enquiries until publicity, all can be found in her work.

Atrium foundation has a board that consists of: