Since October, 10, 2010, Arthur van de Graaf (The Hague) has send hundreds of disposable cameras to children all over the world. Ten years later, he set up a newspaper containing the photos of dozens of ten-year-old children from all over the world. Some of these photos can be seen from October 8 until November 5, 2022 in the Atrium of the City Hall of The Hague. This exhibition is part of the Museum Night The Hague and International Youth Art Festival The Enchantment.

Project1010010
The pictures of the children were taken on the way from home to school. It also contains photos of Dutch children, for example from The Hague. All captured with a simple disposable camera that reached them from the Netherlands. They eat, they go to school almost everywhere, there is time to play, love for family, cuddling with pets.

Newspapers are full of news every day. Arthur’s newspaper contains small stories, told through the eyes of a 10-year-old only on screen. We know the world through the eyes of adults. Images that normally make the news are not in this newspaper. There are pictures in as you could have taken them. The images of the children all over the world, all together in the pages of this newspaper, show how much we differ. But also how much we have in common. 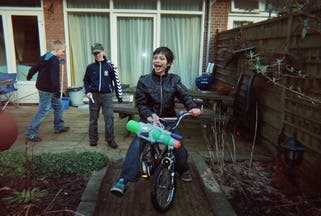 Workshop The Enhcantment
Each year during the Autumn Break the international children’s art festival ‘De Betovering’ (The Enchantment) takes place in The Hague. From the 21th till the 29th of October 2022, children up to 12 years will be treated to some 300 performances and workshops at 55 different locations, such as this exhibition and The Enchantment: Workshop Project10101010.


Date and time:
This event has ended
Share this event