Atrium City Hall and Museumkwartier will bring Linda Nieuwstad’s Lapwing Flowers from Saturday afternoon February 11 as of 14:00 hours to March 10, inside to the Atrium. These enormous art objects pay tribute to the prints of artist Maurits Cornelis Escher. With various exhibitions spread throughout The Hague, the city will be all about M.C. Escher, who was born 125 years ago this year. Like Escher, artist Linda Nieuwstad became fascinated by graphic forms in nature.

Linda’s Larger Than Life Flowers
Inspired by paintings of Dutch Masters, such as M.C. Escher, Linda Nieuwstad creates large sized flower pieces made from truck tarpaulin, steel, pvs, wood, rubber and wool. Nieuwstad’s works refer to paintings and prints the visitor may find in collections of the Museumkwartier cultural hotspots and now in the Atrium of the City Hall in The Hague.
Ten years ago Linda Nieuwstad was studying for her Masters in Fine Art at the Sandberg Institute in Amsterdam. One day, when her fellow students were visiting contemporary art exhibitions, Linda visited the exhibition of the 17th century flower painter Jan van Huysum in an old museum in Delft. At that time she did not know that this rather insignificant day in the museum would turn her life upside down. She was totally overwhelmed by the meticulously painted flowers on the masterpieces. The tulips looked freshly picked and the tiny flies on the paintings were as fragile as the real ones. Linda studied every painting in detail and she got several warnings from the museum supervisor as her nose was often a bit too close to the canvases. She imagined she could step inside one of the paintings and smell the roses, touch the soft hairy tulip stems and take a nap under a hollyhock. From that day on, Linda Nieuwstad wanted to live in a flower painting and she has been making big flowers ever since. The Lapwing Flowers which can be seen in the Atrium of the City Hall in The Hague, are inspired by M.C. Escher (1898—1972) work Day and Night, woodcut, 1938 © The M.C. Escher Company BV, Baarn. 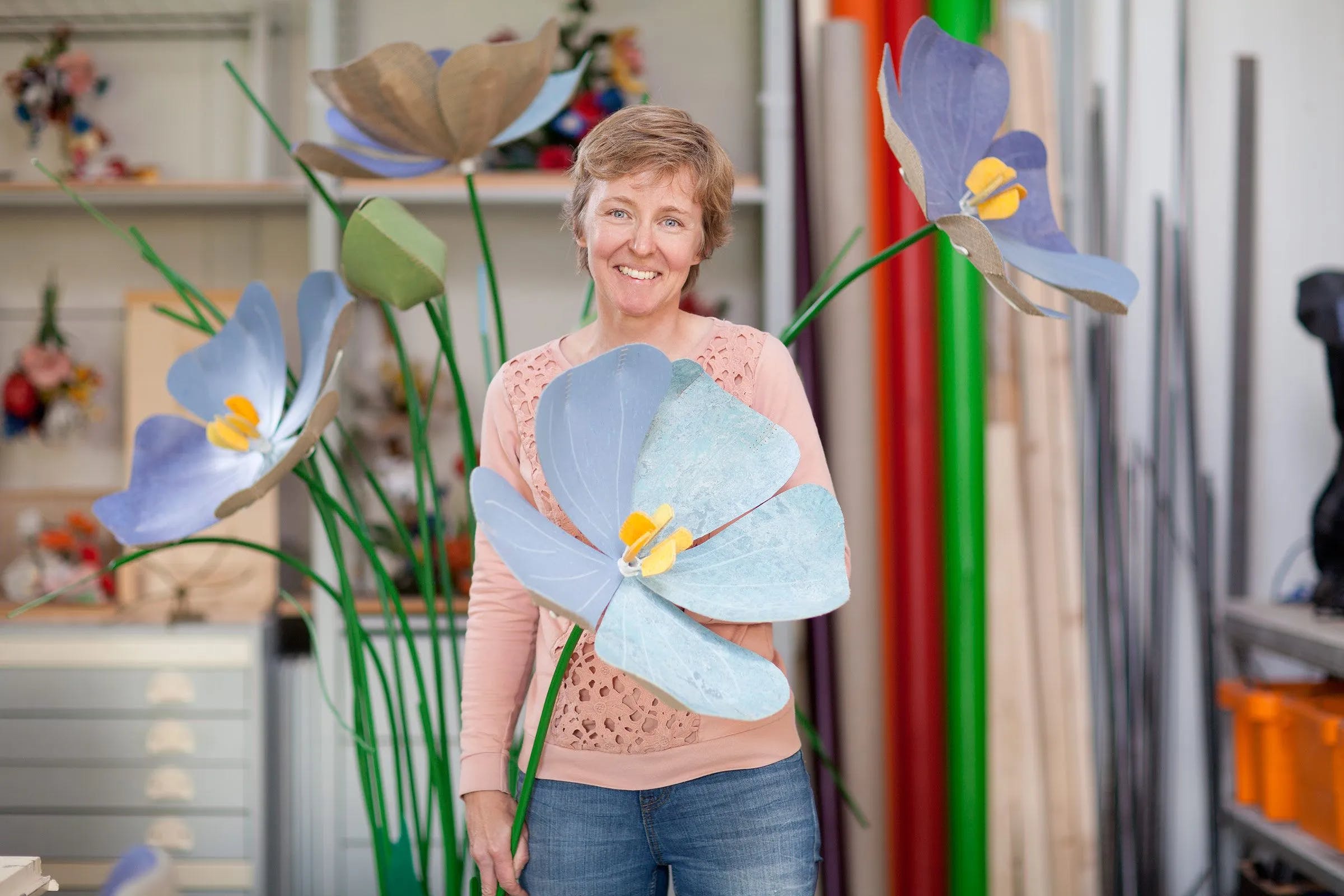 Biography Linda Nieuwstad
Linda Nieuwstad (1974, Middelharnis) spent most of her childhood in a rural area close to a town called Zoetermeer in the Netherlands. Zoetermeer had been built in the seventies as a suburb for civilians. As a teenager Linda cycled daily through Zoetermeer to go to High School and she began to dislike the monotonous suburb. Every house had the same front door, the same garden fence and the same decorations bought in the same store. Somehow  creating large sized flowers originates from Linda’s childhood in Zoetermeer; she deeply felt the urge to celebrate the uniqueness and the abnormal things in life. And that is why her flowers do not look like the perfectly cultivated flowers from the flower booth next door. Linda wants her flowers to be irregular, Linda wants her flowers to have little flaws; her flowers should reflect life itself. In the nineties Linda studied Human Geography and City Planning at the University of Utrecht. Afterwards she worked as a civil servant for the City of Hengelo.
www.lindanieuwstad.nl 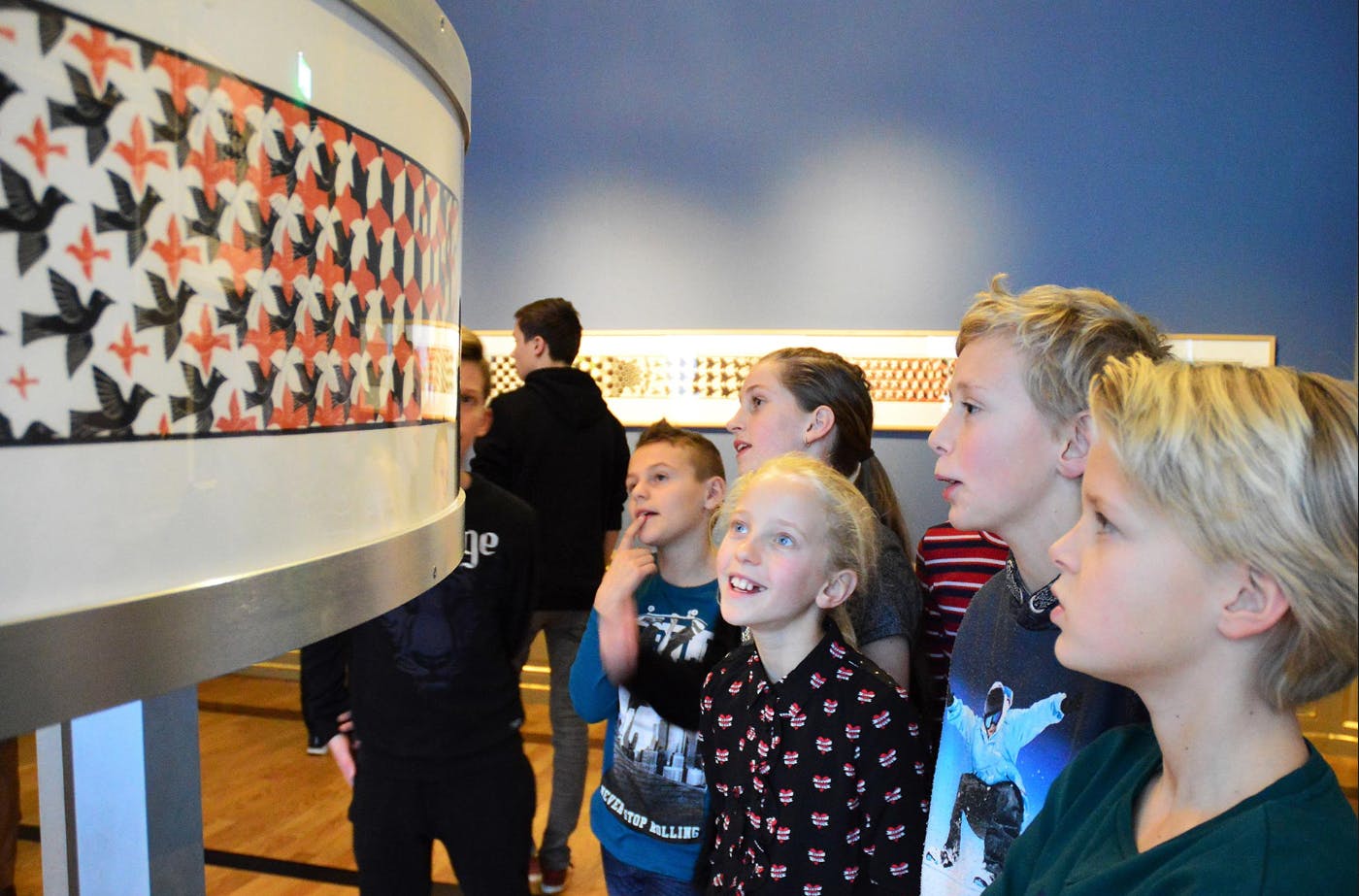 Atrium celebrates 2023 Year of Escher
It is 125 years ago that the artist Maurits Cornelis Escher was born. With the largest museum Escher collection in the world, Kunstmuseum Den Haag and Escher in Het Paleis form the center of this special jubilee year. With various exhibitions spread throughout The Hague, the city will become Escher’s in 2023. For several months now, primary school students from groups 5 to 8, have been given museum lessons about his famous prints in the Escher Museum. They are being inspired by his works and after that they are set to work on their verion of the Metamorphose with their class. Their drawings become part of a large co-creation in honor of M.C. Escher. This festive metamorphosis will be shown in the summer in the Atrium of the City Hall in The Hague.
www.escherinhetpaleis.nl